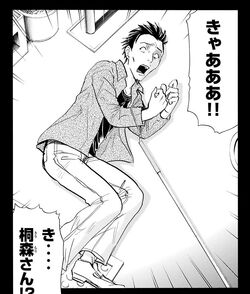 Ran Kirimori is the culprit behind the death of Takeshi, her stepfather. Using the mosquito sound ringtone, which cannot be heard by anyone above the age of 20, Ran managed to pinpoint Takeshi's location within the darkness and stabbed him to death with a poison syringe. It is revealed that Takeshi, who is a con-artist, murdered Ran's mother Sachiko and disguised the crime as a suicide in order to claim her fortune shortly after their marriage. As the police was unable to bring Takeshi to justice despite the clear motive, Ran decided to take the matter into her own hands and avenged her mother.

Retrieved from "https://thekindaichicasefiles.fandom.com/wiki/Dark_Castle_Murder_Case?oldid=12331"
Community content is available under CC-BY-SA unless otherwise noted.